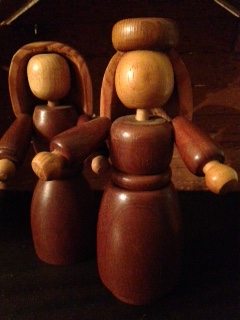 We don’t know much about Joseph, but I think it’s safe to say he would have been terrible on a T.V. reality show.  Think about it.  His girlfriend was pregnant, and knowing the child was not his own, he could have slandered her name via social media (literally social), drunk too much wine, and wrecked a perfectly good donkey cart.  Instead, he planned to quietly distance himself from her in a way that would maintain the dignity of everyone involved.  No T.V. ratings there.

Once Joseph understood what was going on, he trusted both God and Mary, and did exactly what the angel told him to do.  Over time, he proved he was the perfect father for Jesus, traveling long distances and making wise, careful decisions to keep his child safe.  Going out of one’s way for the sake of another?  Thoughtful decision making?  Again, no ratings.

I hope you are finding great happiness in this week of joy.  If so, please share!